For those with their head in the ‘clouds’, who have not yet played or heard of Yonder: The Cloud Catcher Chronicles, it is an aesthetic open-world adventure game. It was initially released for PC and PS4 on July 18th 2017. It will be released for Switch on 17th May 2018. The game can be purchased as a physical copy, or alternatively can be downloaded from the Nintendo eShop for a reasonable $26.99.

To any UK gamers, the game currently has a 10% discount and can be obtained for a reasonable £20.69 if pre-ordered today. You can pre-order it here. For players outside the UK, you can get the game on Amazon here.

Upon its release for PC last year, Yonder was praised for its beautiful graphics and amalgamation of different elements from popular game series’.  It has been compared to Zelda, Harvest Moon, and Animal Crossing, as well as many other games.

Straight away I was able to see Zelda’s influence upon the game, with the beginning being suspiciously reminiscent of both Wind Waker and Breath of the Wild. (My boyfriend’s exact words upon watching my gameplay were “Oh look it’s Breath of The Wild!”). ????

A̶f̶t̶e̶r̶ ̶s̶p̶e̶n̶d̶i̶n̶g̶ ̶a̶n̶ ̶h̶o̶u̶r̶ ̶o̶n̶ ̶c̶h̶a̶r̶a̶c̶t̶e̶r̶ ̶c̶u̶s̶t̶o̶m̶i̶s̶a̶t̶i̶o̶n̶  you begin the game on a ship set sail for Gemea, a mysterious island full of Sprites, animals and Murk (that darn Murk!). Unfortunately, due to a disastrous combination of stormy weather and incompetent crew members, you arrive at Gemea via shipwreck (you had one job guys!????). Armed with a handy compass to (literally) light the way, you set off to explore the first part of Gemea. The Grasslands. 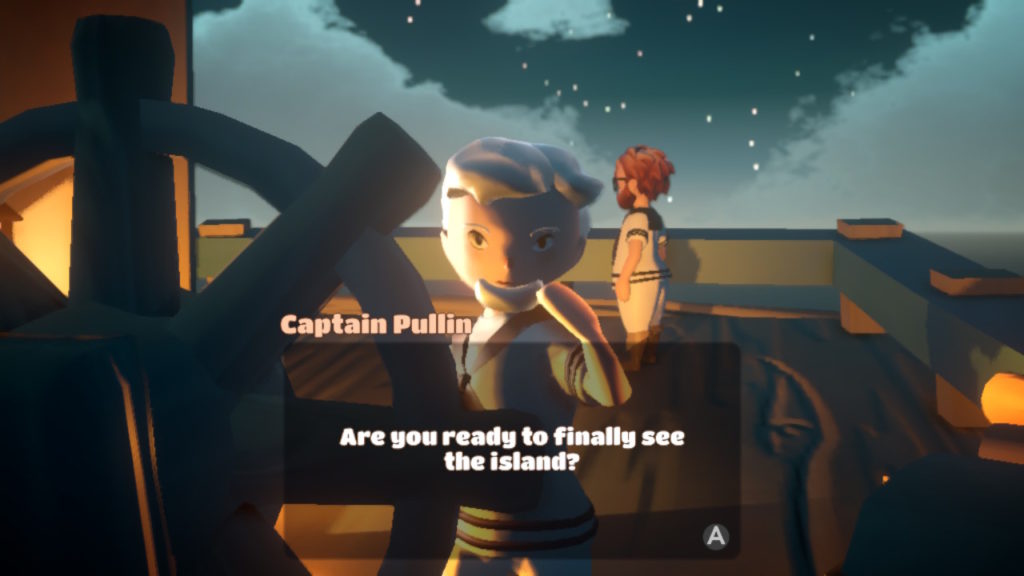 Similar to the game RiME, death in Yonder is apparently impossible. Jumping into deep water or off of cliff edges results in your character either re-spawning or whipping out an umbrella to float to safety?! So in this sense, in combination with no time constraints, no combat, and free reign to explore Gemea (aside from a few essential quests for story progression), the game is very relaxing and family-friendly.

Things I liked about the game ???? 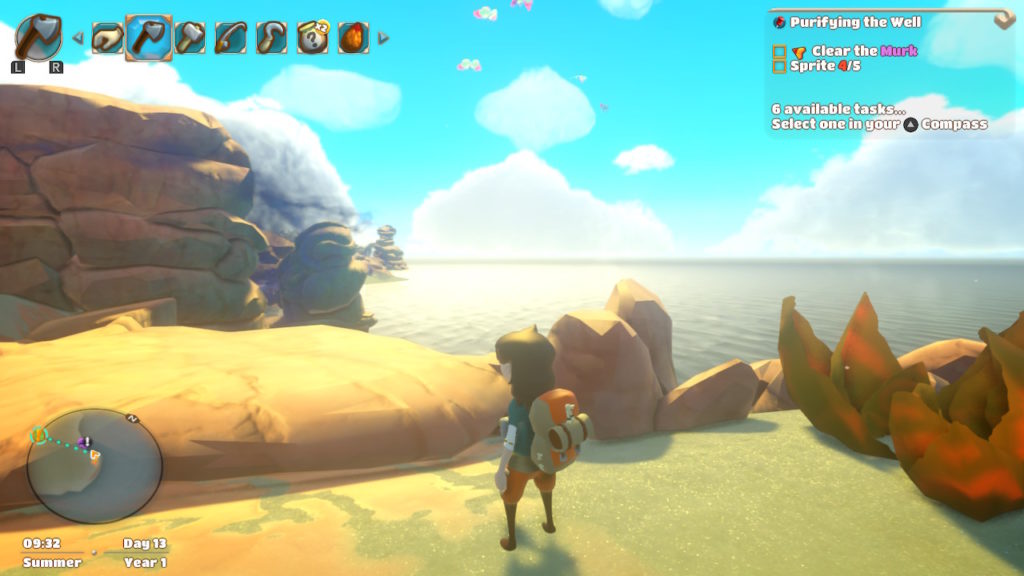 Things I disliked about the game ???? 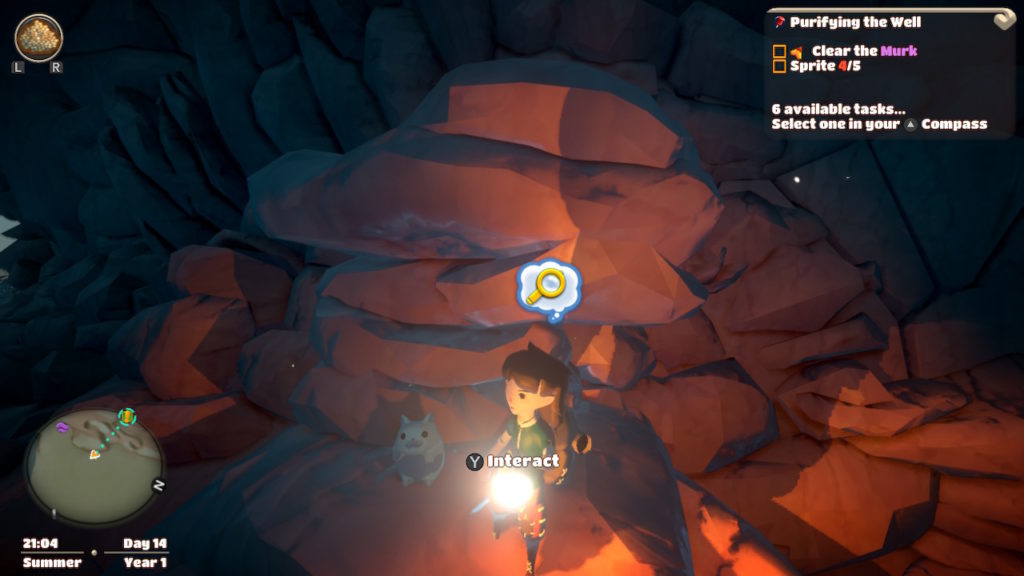 (Side note: Is it just me who thinks the cats look kinda creepy? With their vacant eyes and ability to stand like a human..) 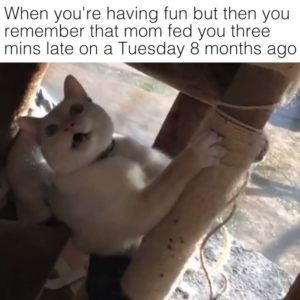 Additionally, some cats can only be discovered during certain seasons. Therefore after collecting all 55, I reckon players should be rewarded with more than just a stinkin’ trophy. Maybe a cat (or six) of our own, because who needs 55 cats anyway..?! ????

The game’s music and cinematics play a big part in making the game appealing. Beautiful mini cut scenes (such as when a player discovers a new area) as well as enchanting music, creates a soothing gaming experience and contributes to the game’s ‘Breath of The Wild’ feel. Even the little things have been thought of by developers. For example, the presence of pauses between music in order to lessen the likelihood of the player getting bored of the Soundtrack. 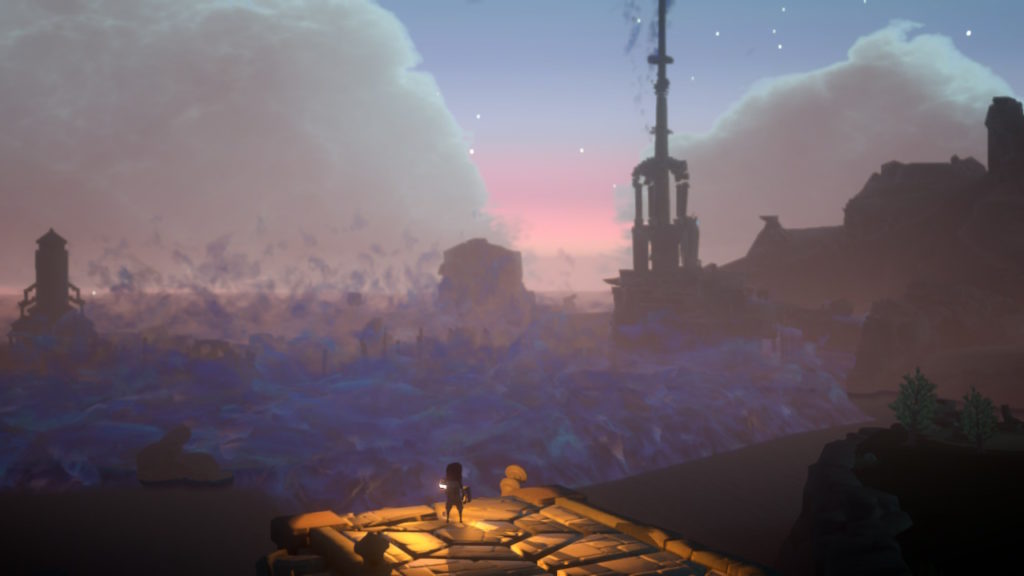 Despite the murk casting a shadow over their homeland, the people of Gemea (mostly) remain welcoming, humble and charismatic. 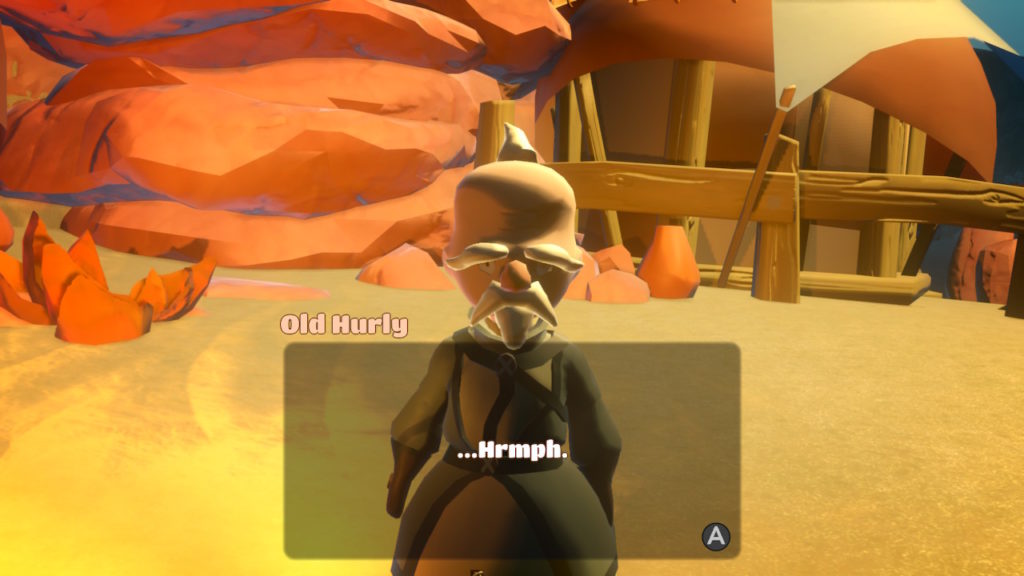 This guy being an exception… With combat absent, the gameplay is calm, relaxing, and gentle, and focuses more on the player’s journey, as opposed to fixating on the destination.

Finding Sprites is essential in Yonder in order to clear areas of Murk. Sprites can be found in many different locations, and each have their own unique personalities. They can range from forgetful, to grumpy, which kind of reminded me of Snow White and the Seven Dwarfs.

Although it can definitely be said that Gemea’s flittering inhabitants are a little more sprite-ly (heh) and helpful than their Disney counterparts. 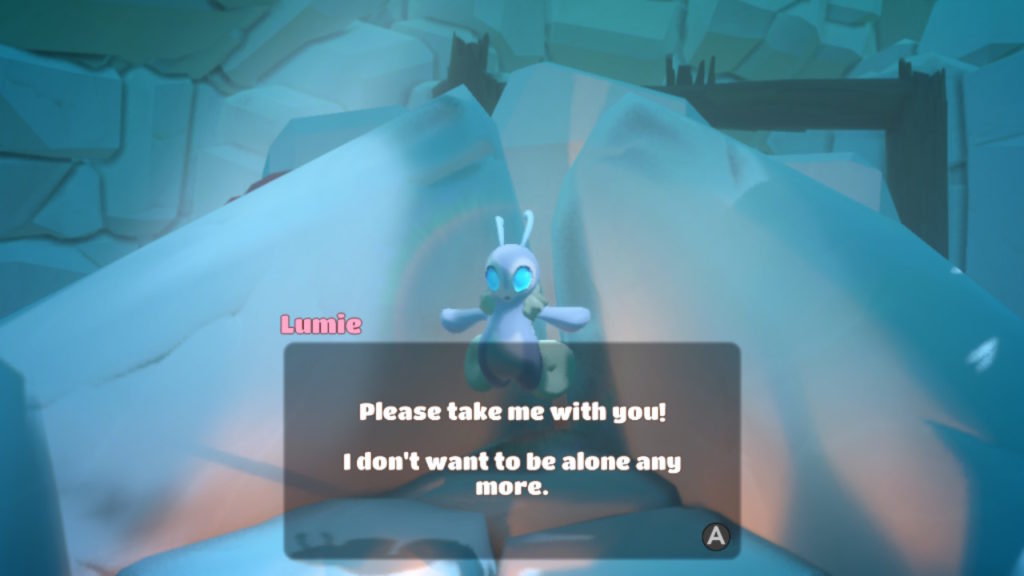 The controls in the game are pretty straightforward, although players are given tutorials nonetheless.

Having Joy-Cons with joysticks makes the game more enjoyable and accessible for me personally. (Confession: I’m terrible at using WASD in PC games and will set the arrow keys as direction controls wherever possible). It is easy to use the compass (a useful tool) in the game by simply pressing the up arrow button (△) on the blue (left) Joy-Con.

I played the majority of the game in handheld mode, although graphics can definitely be appreciated more when the game is played on a larger screen.

The graphics are hands-down the best aspect of the game for me. From twinkling sunsets over water, to luscious green breezy meadows, the varying utopia-esque landscapes are best described as eye-candy. 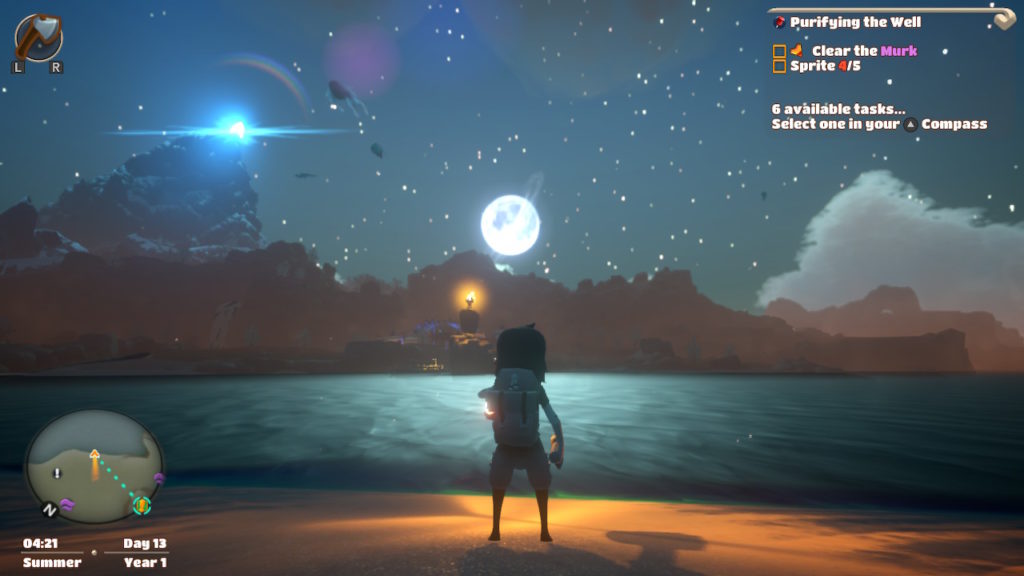 The attractive art-style is not dissimilar to My Time At Portia (MTAP). Both Yonder and MTAP are beautiful open-world RPG simulation games. They both allow players to craft items, manage a farm, and engage with a plethora of charismatic characters. They have also both earned a respectable 9/10 rating on Steam. 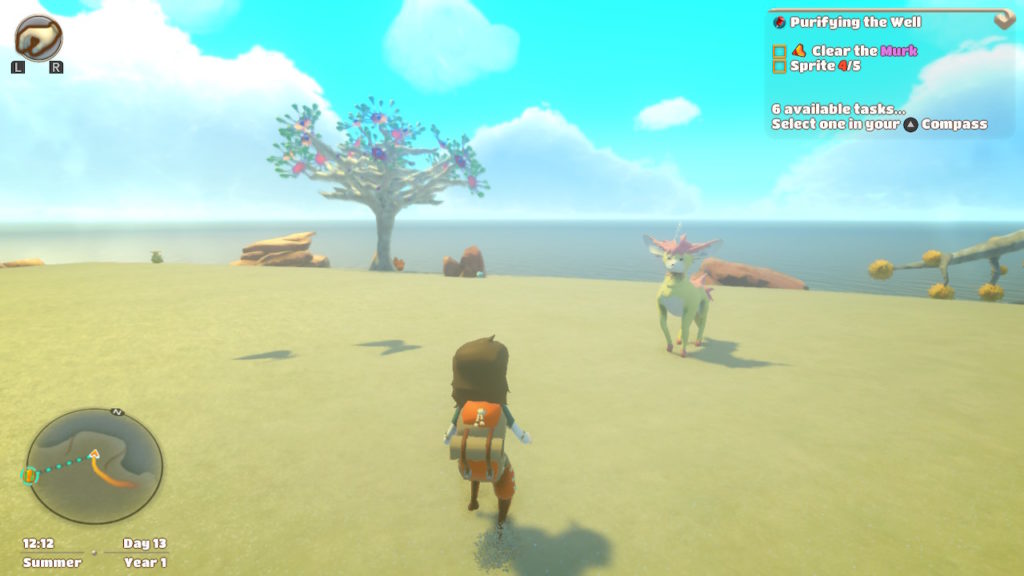 Unlike many other games, Yonder utilises a bartering system. As opposed to just obtaining some of a currency and buying things, you barter with tradespeople instead. This is actually pretty useful as currency in games can sometimes be hard to accumulate. 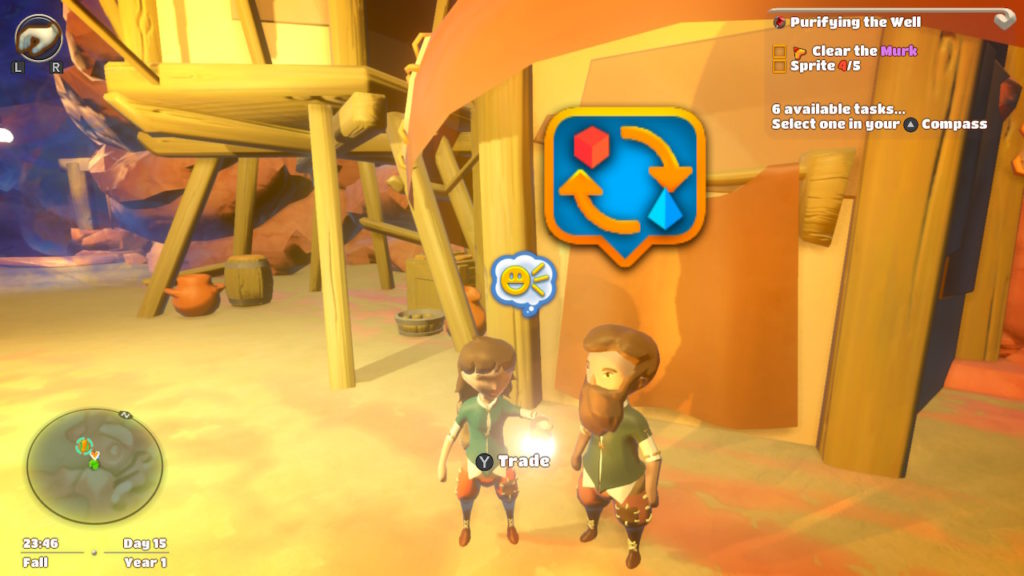 Some things can’t be purchased through bartering and will have to be crafted instead. An example being the Toy Cat (*whistles nonchalantly*). There are 8 different crafting classes (Guilds) in the game. Your character starts out as a Wayfarer, but can join different Guilds and become a:

Each class offers their own unique crafting recipes (not dissimilar to Level 5’s game Fantasy Life).

The game offers both crop and animal farming. Players can befriend exotic creatures such as the Groffle (by bribing them with their favourite foods). The creature will then follow the player. If lead to a farm with an animal pen, it can then be adopted. 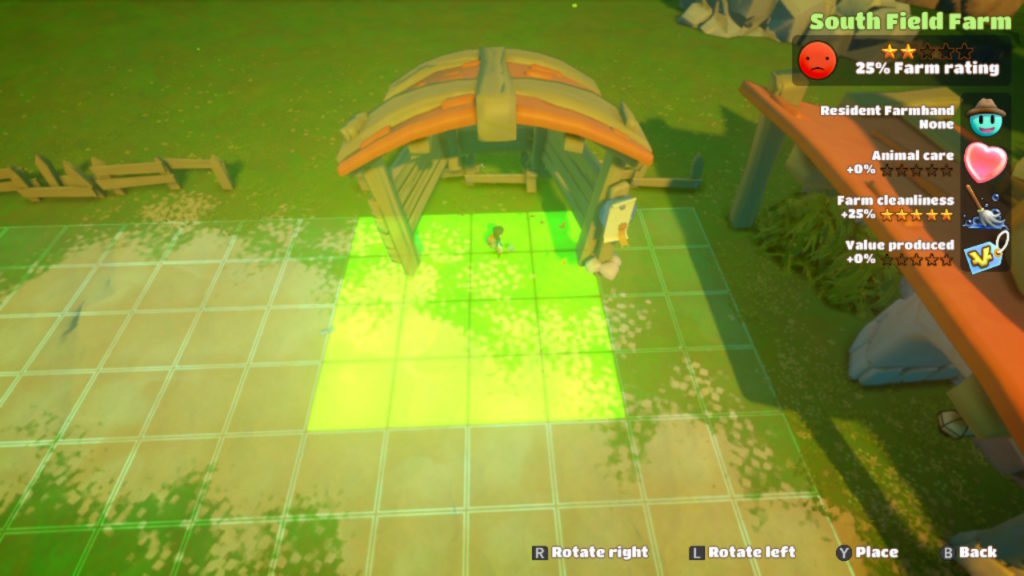 You can also hire many characters in the game as farmhands (again, by bribing them with food). Farmhands will undertake a variety of tasks, and essentially help to keep your farm clean, tidy and running smoothly. Thus, maintaining its rating whilst you are away.

There are eight different regions to explore in Yonder.

The Grasslands ???? – Grassy plains located in the center of Gemea

Hearthwind Vale ???? – A region full of plateaus, valleys and swamps

The different regions have their own unique climates, landscapes, characters, quests, guilds, wildlife and more.

Overall, I found Yonder to be an enigmatic game with lots of different features to keep players entertained. The variety of (sometimes kooky) quests, plethora of beautiful landscapes to explore, and the ability to farm, craft, mine etc, makes boredom unlikely, even for those with the shortest of attention spans.????

Whilst the vast landscapes may be overwhelming at first, you will become well acquainted with them over time. Having a large open-world isn’t necessarily a bad thing as it helps to make the game a little more challenging, as your compass doesn’t guide your character everywhere.

Put simply, if you are a fan of My Time At Portia, Stardew Valley or Fantasy Life, I would definitely recommend purchasing this game for Switch.

Yonder: The Cloud Catcher Chronicles will release on Nintendo Switch eShop May 17th, a physical version is set to release on June 12th, you can-pre-order it here.

Big thanks to Prideful Sloth for providing the review copy of Yonder: The Cloud Catcher Chronicles on Nintendo Switch. 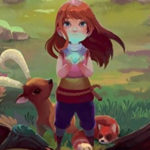