Hokko Life is described as a ‘cosy, creativity filled community sim game’. The game is being developed by Robert Tatnell who runs his own indie game dev company, Wonderscope. Initially, Wonderscope intended to both develop and publish Hokko Life. However, this is an understandably big feat for one person. Therefore in April 2020, Wonderscope revealed that they would ‘team’ up (sorry not sorry) with Team 17, who will now publish Hokko Life. Team 17 are notorious for publishing highly regarded games such as My Time at Portia, Overcooked, and Yooka-Laylee. Initially, Hokko Life was expected to release on Steam later in 2020; The impact of COVID-19, however, could (like many games), delay this. The release date for the game on Steam is currently TBA. The price of the game is also not yet known.

Hokko Life begins with you stepping off of a train. Now the proud owner of a kinda dusty old workshop, you are free to craft and create to your heart’s content. The quiet village you’ve moved to, needs your help to create an endearing town for its residents. Armed with plenty of paint and tools, design, build and decorate new homes for your neighbours.

Players can craft materials and combine them as they wish. Combining them creates amazing new furniture and items for the town. By collecting flowers and mixing paints, you can then design wallpapers, flooring and even clothing. With an abundance of choice, you can design items from fetching floral wallpaper to interesting urban-industrial furniture. Whatever your taste, with a workshop at hand, you have complete freedom whilst designing the town.

The first game element to be discussed in the July Hokko Life update is fishing. It’s already been announced that fishing will be a feature for players to look forward to. For example, the game’s Steam page informs us that the fish have unique habits. The advice therefore given is to switch up your approach, and to anticipate each catch presenting unique challenges when reeled in.

The game’s fishing feature, however, has since been switched up. And we’re ‘searious’ when we say it’s possibly one of the best updates yet. We’re not even ‘squidding’!

It’s ‘Ofishal’, In Hokko Life You Get An ‘Oppor-tuna-ty’ To Fish. But There’s A Catch: Actually Catching Fish… 🐟🎮

The majority of Wonderscope’s work this month has been dedicated to working on and improving the fishing gameplay. Robert from Wonderscope has kindly decided to walk people through how fishing works in Hokko Life to show how far the game has come!

After re-starting the inventory, Robert was able to add bait to the game! Players can attach the bait to an equipped fishing rod. Having bait on your fishing rod will alter your chances of reeling in certain fish. Players can craft bait using different resources found in the game: but only once you’ve unlocked the crafting recipes.

If you right click on a certain type of bait in your backpack, you will then be prompted by a message. The message will give you the option of attaching the bait to your fishing rod:

Cast your line so that your bait and hook are in the water. It’s then just a matter of waiting for a fish to spot them. Resist the urge to try to reel in the fish as soon as it nibbles. The fish could take quite a few nibbles at the bait before being hooked, so patience is key. You’ll know when the fish has taken the last bite as the action UI will pop up. When this occurs, you have a short amount of time to press ‘Interact’ to hook the fish before it gets away.

But because nothing in life is easy right? Wanting to make Hokko Life that bit more challenging, Wonderscope have added another step which players must complete before that fishy is theirs. That next step, or challenge is the fishing mini game. The aim of the game is to keep the fish in the ring until it reaches the goal line. Naturally, the fish have minds of their own and the pests will try and swim away. This means you’ll need to position your rod left and right, and press ‘interact’ to reel a fish back into the ring.

If the fiendish fish remains outside of the ring for too long, it’ll get away and you’ll fail the mini game… 😒

On the other hand, there’s a chance that a chest could emerge in the mini game. If you manage to guide the frustrating fishy through this chest, it’ll pop open! And voila! You’ll get your fish and a random reward!

Robert said that he recently tried out a “diorama” look for the fishing mini game. He decided upon building a little scene to make the mini game look more appealing and generally aesthetic. The dev confessed to the mini game originally resembling a boring rectangle and likes the cuter direction he has taken with the fishing aspect. Robert also excitedly added that depending on the location you fish in, the diorama will change in accordance with it!

Oh For Cod’s Hake! I’m Not Shore I Wanna Buy The Game Now! I’m Gonna Have To Mullet Over! 😂🎣

Fishing challenges were also added to the game more recently. These challenges will unlock for players after they’ve been fishing for a while. Furthermore, Hokko Life will offer a weekly challenge where players can get bonus rewards.

These challenges are generated once an (in-game) week and necessitate players to catch a specified amount of fish within a certain time. These can either be specific fish, or any type of fish. The time limit varies and is based on the rarity of the fish, as well as if there are any nearby. But don’t worry, if you fail you can always go back and retry! Also, things can occur behind the scenes too, making sure that you have a chance of winning the challenge. I smell something fishy there. 🤔

Robert wanted more variation in the challenges, but explained that setting them up and getting them to work took considerably longer than expected, so he decided to settle with just one type for now. On the plus side, he excitingly added that the system is now there for challenge types to be added in the future.

Whilst the fishing update was the most prominent part of July’s Hokko Life devlog, other updates were also covered. These include:

Finally, Hokko Life Devlog #3 contained some brief updates on improvements to other avatar assets and features. These include face and head shapes, tweaks to hair styles, and deleting ‘ugly’ old clothing items and old avatar assets. Robert said deleting the old ugly stuff felt good, so we’ll take his word for it. But seriously though, please give the basic avatar assets some clothes and features before showing them to us. Especially when they seem to be crazily wielding weapons of some kind… #NightmareFuel 😱😂

Make sure to stay tuned for our coverage of Hokko Life Devlog #4! The game is really shaping up, with some new features and updates you won’t want to miss! 😊

Click here to check out an exclusive interview with the game’s solo developer. 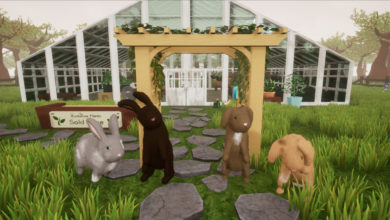 Little Sim World Is Getting Delicious With New Cooking Addition