Solo Islands of the Heart is a narrative puzzle game developed by Team Gotham and published by Merge Games. This calming game will have you reflecting on your personal meaning of love and your current or past experiences. For the purpose of this review, I played on the Nintendo Switch which you will be available to the public on August 1st, 2019. As of July 31st, 2019 you’ll also be able to play the full release on Xbox One and the PS4. Below are some details about the game in general but due to its private nature, I encourage you to play for yourself and be honest with your answers on your romantic relationships which is the game’s intended purpose.

You start the game by first choosing your own gender from male, female, and non-binary, then choosing the gender of the one you are or want to be in a relationship with (including anything). I find it strange that you only have the choice of three avatars that you can’t even customize especially when this experience is meant to be specific to you. I would have loved it so much more if I could make my character look like me and my partner. You do at least get to insert the name of your loved one before proceeding which you get to see written out on the back of your boat.

I selected the only female available to me and then the game chose the old man with the beard for my partner. At first I wasn’t sure if the character was just selected to be my guide but the more I played the more I realized that his spirit was following me and occasionally we got to interact. He was also referring to himself when he questions me after every choice. Sometimes it felt like there was something negative to be said about whatever answer I chose but it wouldn’t make much sense to have it any other way since everyone’s answers will be different and that’s O.K.

What is in Your Heart

Your boat will take you to several different archipelagos hovering above water that tie into each other. As you progress, more will appear containing their own set of puzzles to solve in order to awaken the Sleeping Totem that corresponds to that area. Once you’ve reached a Sleeping Totem, it will ask you questions regarding your past and current experiences with love. There is no right or wrong answer, the point is only to contemplate the answer you provided. I decided to play this game with my real-life partner and we found ourselves having philosophical discussions about the choices and perspectives regarding love and romance. The game will also continue to remind you that you may not like what you unearth but it is necessary to rid yourself of doubt.

A Poetic and Casual Adventure

The game wants you to think deeply and likens your journey to a discovery of what is truly inside your heart. Hopefully by answering these questions, you will have a better understanding of yourself and your true feelings. Solo Islands of the Heart gives you a moment to pause and even meditate by doing very simple and optional tasks along the way; playing music on your guitar and snapping photographs with your camera.

The guitar actually plays really well and beautifully and when taking a photograph you can adjust the lighting, but unfortunately not distance. There are also a few different animals that don’t really serve a purpose. They’ll shy away from you until you have fed them their favorite food, then you can proceed on petting them and having them follow you around. You’ll also find scattered throughout the environments love letters that seem to be tied to the answers you have been giving the Totems. They’re also optional but they are enlightening if not a little cheesy.

The content starts off rather innocent but then I got thrown with a question about the importance of sexual relations. Mind you, it was not in a crude or explicit way, but the game seemed more geared to a younger audience due to the graphics and the slew of adorable creatures you interact with along the way. This game however does require a lot of thinking and reading of text, which is written out in very complex way. Meaning, this is not a game for children.

For a contemplative and relaxing game, the music is perfect in its simplicity and serene quality. The nature isn’t very detailed with its polygonal shapes, but it is very peaceful with its warm colors and plant-life. Aside from the actual puzzles, you have the option with interacting with the previously mentioned creatures that are pretty odd, but unique and cute in their own right. There’s a black cylindrical cat, a tiny pink elephant, a pudgy bird, and some puffer fish. They’ll even leave behind rainbow poop after you’ve fed them. When you’ve reached the end of a segment, you place the items you received from the Totems inside of a large lighthouse. I do like seeing the view from up high overlooking the water.

The looks can be very deceiving with only a few boxes at your disposal however these puzzles become quite challenging later in the game. I’m glad my partner was there to figure them out with me because I think it would have taken me more than a few hours to complete the game. Occasionally you will receive new items or abilities you can use such as a parachute and a staff to move around the boxes. This insures you don’t get too used to how everything works and come up with different solutions.

I haven’t tested this out but there should be different ways to accomplishing the same goals. There also seems to be some puzzles that you are able to skip. My favorite puzzles were the very few dungeon-like ones about creating shadows. There was no platforming involved and it was easier to mess around without having to restart a bunch of times.

It can be a little frustrating to fall off the edges of the islands into the water because then you have to swim to the nearest ladder to get back to the surface. There is no way for you to jump in this game but that is a contributing factor in the puzzles. For the most part, you’ll find yourself trying to create bridges to get across and platforms to reach the heights. If you are impatient like me, this may ruin your ‘zen mood’, especially if you’re struggling. I don’t want to share too much more about the puzzles so as not to spoil the game. Nevertheless, I’m surprised that there were different ways to manipulate square boxes but I still found myself getting a little tired of the repetitiveness.

One of my major complaints about the game would be the camera. There are some options to inverting the axis and sensitivity but for some reason I can’t place why it kept bothering me. The movements are a little jarring and you do need to constantly rotate your camera to see everything.

Another complaint would be that some of the sentences in the questions didn’t make much sense and possibly got a little lost in translation. I mention this because the wording is very important in order for you to make the right decision for yourself and is the large focus of the game. I wish there were more than three options because sometimes I didn’t like any of the answers. Some questions should have even been more specific because the meaning could be interpreted in different ways. We even needed to restart some of these and some puzzles due to the game crashing a couple of times and there being very few autosave moments.

The game ends with you finally getting to physically connect with your partner. It’s almost as if you just went through those trials together and came out of it on the other side (get it?). Solo Islands of the Heart also gives you a little wrap-up of your answers and summarizes it in a nice way. If this sounds like the game for you, you can also check out the official website for Merge Games here.

Solo Islands of the Heart 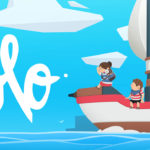