In a gaming climate full of lengthy and mechanically heavy experiences, there is always a place for a stress-free shorter experience. Shape of the World is a prime example of a title that trades out gameplay depth for a short, concise and relaxing gameplay adventure. Developed by Hollow Tree Games, Shape of the World is a first-person walking simulator adventure in which you explore a psychedelic and unknown world that comes to life around you. As you traverse through the world, the flora and landscapes materialise before you. It truly is a world of your own creation. It’s easy to compare Shape of the World to artistic gaming gems such as Journey, and despite not quite being as masterful, Shape of the World manages to provide a beautifully engrossing world that had me so heavily captured in its 1-3 hour runtime, that it freed me from the stresses and anxiety of reality.

If you were expecting a hearty narrative or any inkling of story in Shape of the World, sadly you’ll be disappointed. The lack of an established story leaves the interpretation of events for the player to mould, much like the games world. You awake in a world in a empty world devoid of colour, and from there the world is yours to shape. Storywise, there’s nothing given in Shape of the World, a reality that despite being upsetting, led to me making my own assumptions of what it all meant. Is it all a dream in which you form a world around you? Or are you possibly a god crafting your own shape of the world? It is interesting to theorise after all, and while I don’t particularly think it was a horrible choice to have no story, I do wish for more clarification was being made on what exactly is going on. 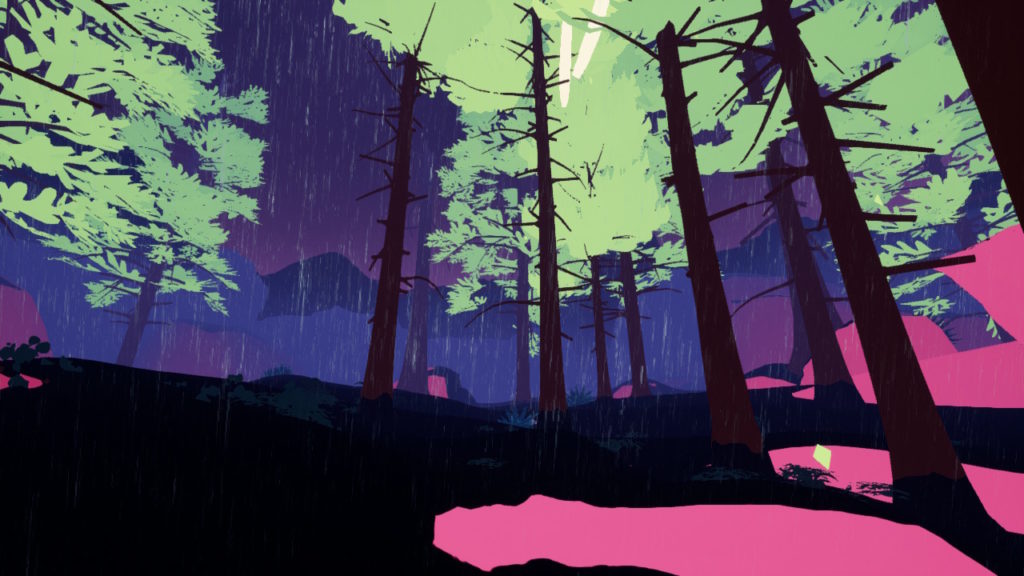 No story in sight, yet the world is still a beauty to explore

In terms of gameplay, your goal in Shape of the World is decidedly simple. You walk around in the world’s multitude of environments, bringing them to life, while locating triangles that once passed through, alters the environment as well as the colour of the world. As you walk through all the locales on your journey, such as mountains, swamps and caves full of water, you’ll find yourself in awe of the environments you are creating all around you. Tree’s spiral up from the ground in a multitude of different designs, tufts of grass emerge on the ground mere metres from where you’re about to stand, and a variety of alien creatures inhabit the land around you. The creatures on display range from weird floating blobs and jellyfish-like creatures, to animals such as fish and a hermit crabs. There’s even a giant pink whale that swims in the sky, if this game wasn’t odd enough already. 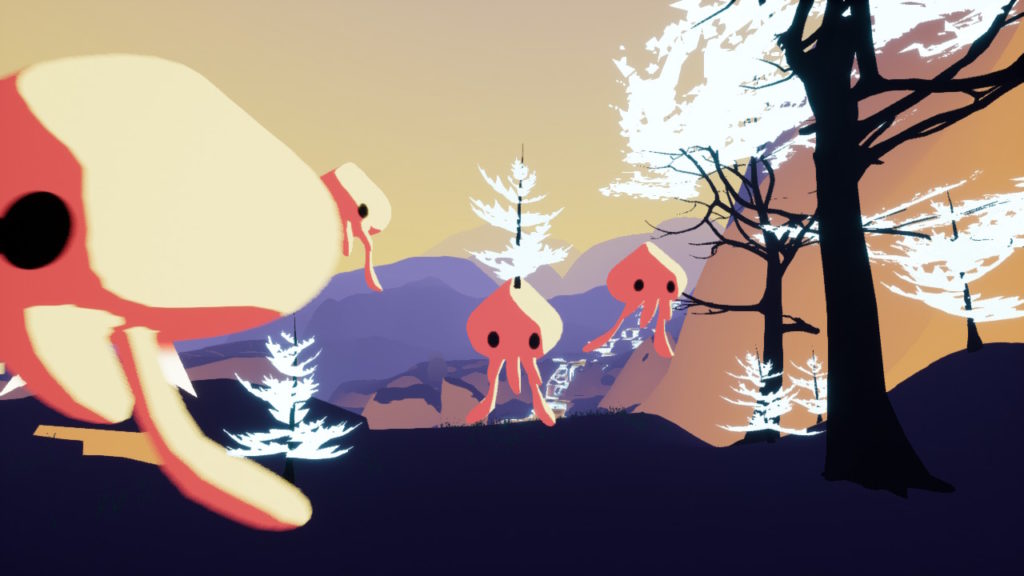 There are plenty of cute creatures to encounter on your travels

In the time between getting from each triangle checkpoint to the next, you’ll find yourself interacting with the flora and fauna of the world. Interacting with trees for example causes them to disappear, while also giving you a momentary momentum boost, allowing you to effortlessly glide throughout the ecosystem you’ve singlehandedly built. Interacting with the abundance of creatures lead to a variety of different results. Some creatures maintain regular activity, while the aforementioned jellyfish looking creatures shoot into the sky like rockets when they are touched.You can also find seeds scattered amongst the land, which when collected further change the colour scheme of the world, but also allow you to plant your own trees and other objects wherever you like. You don’t have to interact with everything in the world, but the curiosities always got the better of me. 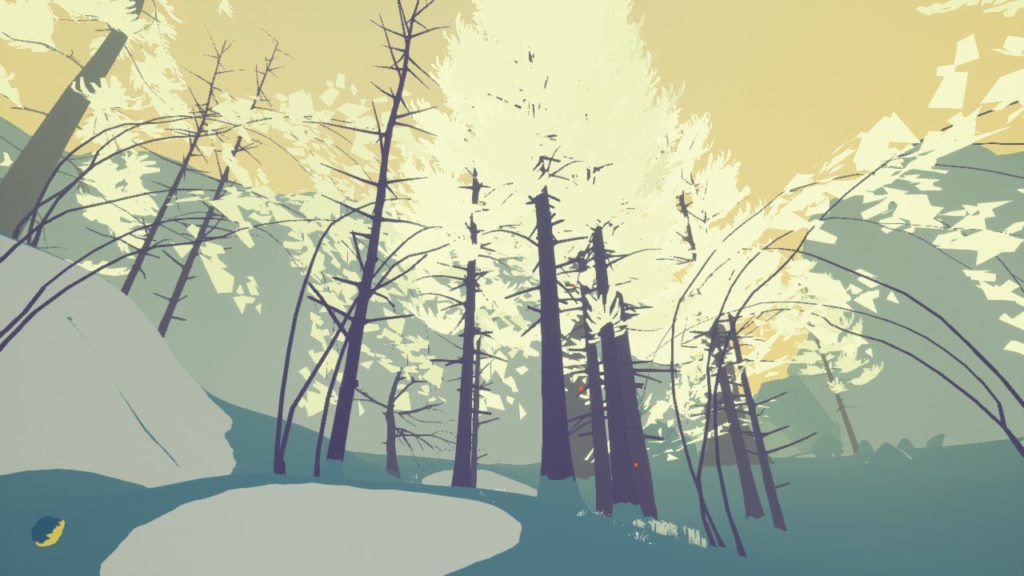 So many lovely trees

There are puzzles in each area of the world, which involve actions such as interacting with a bunch of pillars to create a floating staircase, or touching a group of stalactites to raise the water levels in a cave. All of the puzzles essentially boil down to interacting with a bunch of glowing objects in the environment, and while I wish there was a bit more variety in puzzle design,  the overwhelming urge to progress throughout the world in search for answers meant that I didn’t really mind the lack of creativity in the puzzles. The gameplay in Shape of the World is unashamedly minimalistic, and yet despite the lack of things to do other than simply interacting and exploring the environment around you, I still found myself deriving plenty of enjoyment from the gameplay on offer. At the end of the day, Shape of the World is meant to be an explorative adventure rather than a gameplay deep experience, and it should be treated as such. 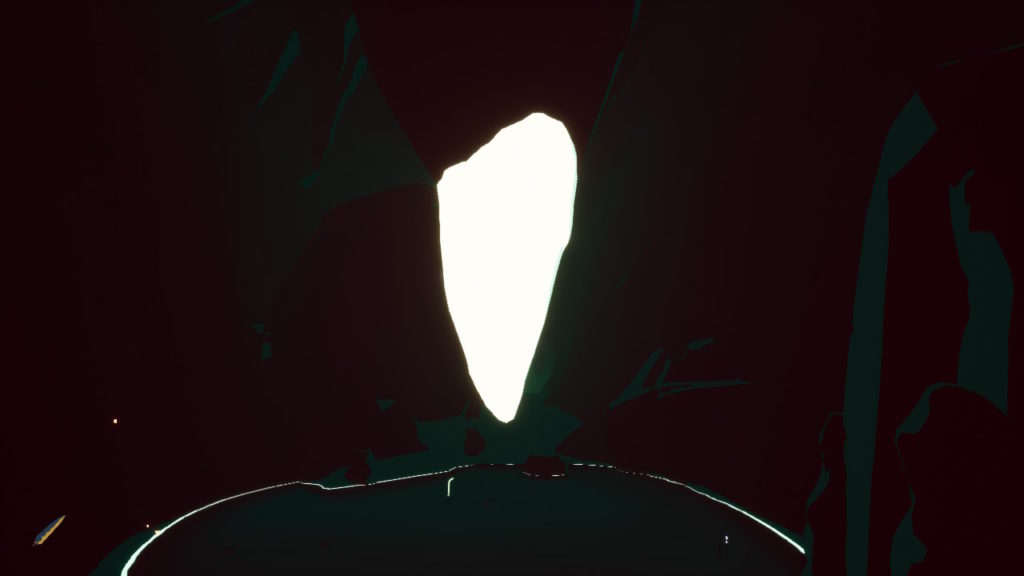 Puzzles involve interacting with glowing objects in the world

Also aiding in making the journey of Shape of the World so engaging is the constantly changing colour palettes that keep the world forever feeling fresh. The game looks jaw-droppingly gorgeous at all times, and although the artstyle can be a little disorienting initially, it’s one of the most attractive strings in Shape of the World’s bow. I found myself constantly taking in the view, as well as taking copious amounts of screenshots. The sound design is top notch also, with the game having a great soundtrack that expertly strengthens the dream-like atmosphere of the world. 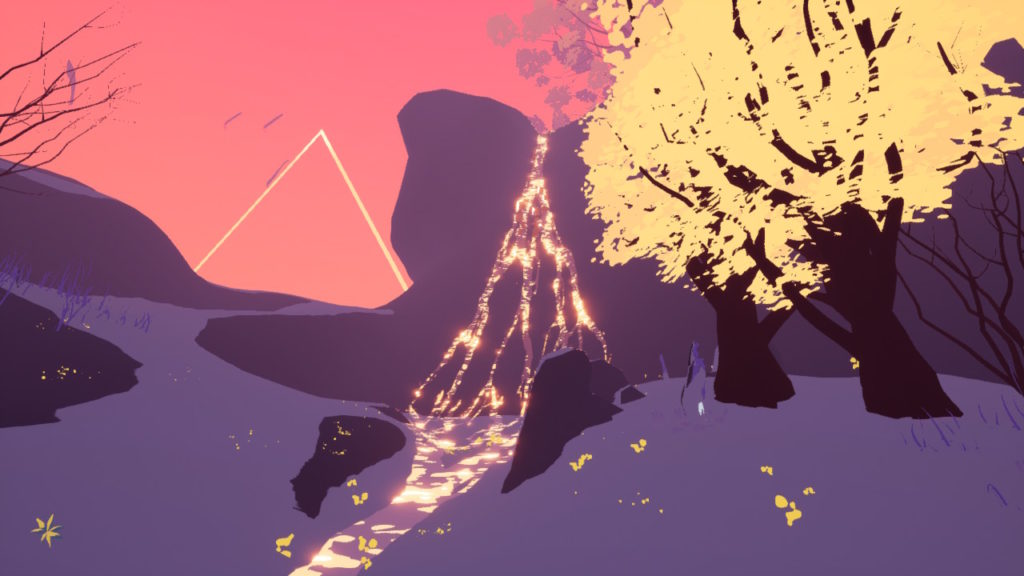 Even with the objective nearby, I always found myself taking in the view

Despite there being plenty of positives, I did run into a few issues with Shape of the World. I’m not sure if this issue appears in the PlayStation 4, Xbox One and PC versions, but on the Nintendo Switch version of the game I encountered numerous performance issues. The game was susceptible to heavy frame drops in small bursts, especially during the staircase sequences where your fast movement leads to the environment generating around you at a faster pace than usual. Sometimes there would be no loss of frames, while in other instances it would drop so heavily that the immersive spell that the game had me under was broken, which was disappointing. Another issue can be seen in the length of the game, as it only occupies around 1-3 hours of time. Yes, you can go back in a second playthrough and locate the seed collectables you may have missed in your initial run, but other than that, the game offers very little in regards to replayability. 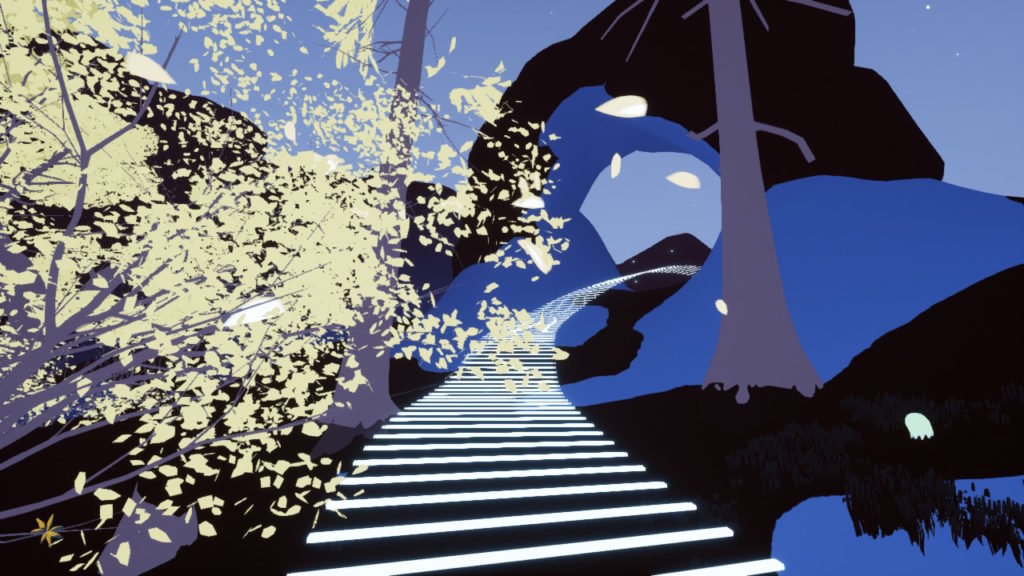 The game is gorgeous, but occasional frame drops hurt the experience slightly

Overall, Shape of the World is a game that is sure to divide opinion. While many will be able to appreciate the artistry on display throughout the journey, I can envision others being miffed over the fact that the game overall lacks substance, with little to no gameplay other than meandering towards each goal, and no story present at all. If you’re a fan of the walking simulator genre of games or are after a short but sweet gaming experience, Shape of the World is a title for you. The world is beautiful, ever-changing and immersive, with the immersion further solidified in thanks to a miraculous soundtrack. The gameplay despite its simplicity does what it needs to in order for you to see the beauty of world you build, and even when you make your way towards the games conclusion, the ever-growing nature of the world meant that exploration always felt new and never stale. Shape of the World offers a psychedelic dream world brimming with otherworldly wonders, offering an explorative journey that I implore you to take.

Shape of the World was review on Nintendo Switch. Thank

Shape of the World 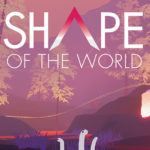