Rocket League’s premise is decidedly simple. Drive your high speed, rocket propelled car, and try and get the ball in the goal. Despite being such an uncomplicated game, Rocket League manages to provide brilliant gameplay that is easy to learn, but extremely difficult to master, as well as an amazing smorgasbord of different multiplayer modes. Driving the ball in to the goal is a simple enough task for anyone to achieve, however the game sports high-octane flipping and boosting that ensures that the game’s depth of strategy is far deeper than it’s initially perceived. Rocket League may have been available on other systems over 2 years ago, but with the Nintendo Switch version only releasing a few months ago, it’s time to have a look at how Rocket League stacks up on the latest Nintendo console.

Rocket League is certainly king when it comes to gameplay. The main gameplay mode, titled Soc-car (brilliant pun, I know) pits vehicle against vehicle in a game of a high speed, high action soccer. As mentioned prior, the premise of Soc-car is remarkably simple, score more goals than your opponent to win, sounds easy enough correct? The simplicity of Rocket League is arguably what makes it such a fun and addictive game, with the gameplay objectives being easy to pick up and play. In terms of gameplay, that’s basically it, but the gameplay is so expertly crafted that it never feels boring or monotonous. 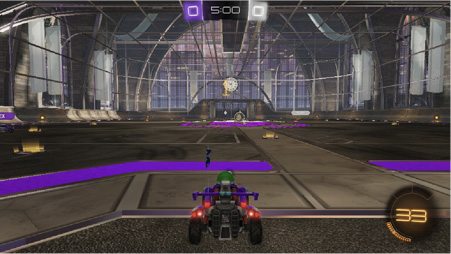 Soc-car is Rocket League’s main mode, and easily its best one

Soc-car isn’t the only gameplay mode on offer though, with various other modes available. Hoops mode converts Rocket League’s vehicular Soccer into a game of vehicular Basketball. Despite being not as fun as the game’s Soc-car mode, Hoops offers a mode that focuses more on keeping the ball in the air, with off-ground possession of the ball being the key to success. Hoops is undoubtedly a far weaker mode in Rocket League than Socc-car, but there is still plenty to be enjoyed in the Basketball themed mode. Snow Day is a mode that yet again changes Rocket League to different sport entirely, with Snow Day being a hockey mode. Snow Day succeeds in being a mode in which players can maintain control of the puck, as the predictability of a puck in comparison to a ball leads to far more controlled games. Being able to boost along the wall while maintaining easy control of the puck is a great feeling, and it was a great side mode that I spent lots of time in.

Rumble is a mode that resembles Mario Kart, with items being used on courses to add to an even more intense version of Soc-car. Every 10 seconds, players are given new items to use, such as a boxing glove that will propel the ball forward, or a disruptor which will cause an opponent’s car to accelerate uncontrollably. Rumble mode is hilarious fun that is best played with friends. The final mode, Dropshot, is a mode that involves hitting the ball into the floor of your opponents, in an attempt to break the floor and score a goal. Dropshot mode is all about maintaining control of the ball in the opposition’s side of the field, as once the floor has been destroyed enough, the goal is available. Dropshot is yet another great mode, being the most unique mode when compared to the other optional modes on offer. Offline play is a great time and the AI tends to be serviceable enough, although sometimes the AI can be a little dumb. If the ball is heading straight for the oppositions goal, they often just drive it right in to the goal. Offline play still provides plenty of hours of enjoyment, and despite the AI overall doing a good job its stupidity can be infuriating at times. The multiplayer is thankfully eons better, but we will get to that a bit later in the review. Overall, Rocket Leagues alternative modes are all great fun, and compliment the game’s already brilliant Soc-car mode. 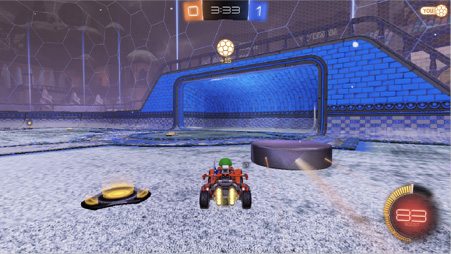 Rocket League’s slew of modes can all be played with differing amounts of players in each side. 1v1 is a mode that is great if you have a score to settle with a friend, but otherwise it’s probably the least ideal mode to choose, as games can feel empty when you only have the singular opponent. 2v2 is also on offer, but the game truly hits its sweet spot in terms of balance when 3v3 matches take place. 3v3 matches nails the equilibrium of intensity and enjoyment, ensuring games flow at a good rate and aren’t too over crowded. 4v4 modes are ideal if you want a far more frantic experience, but I found myself constantly gravitating to the 3v3 games. Rocket League at least provides the option to players, granting them the freedom to find a mode and player count that suits them best.

Car customisation in Rocket League is full of options of things to tweak, from the obvious paint jobs and tyres, to the finer details such as how the engine sounds. Being the Nintendo version of Rocket League, there are a few Nintendo exclusive items, such as the Mario and Luigi hats, as well as system exclusive cars, such as the Mario NSR, Luigi NSR, and Samus’ Gunship. Customisable parts can be obtained simply by playing the game, with microtransactions involving loot boxes being your other way to get a hold of the game’s more unique and awesome loot. I didn’t feel the microtransactions were at all egregious, and despite their existence, they can easily be avoided. Rocket’s League’s customisation options are something I found heavily enjoyable, as it allows for users to design a car with their own distinct sense of personality and flair. 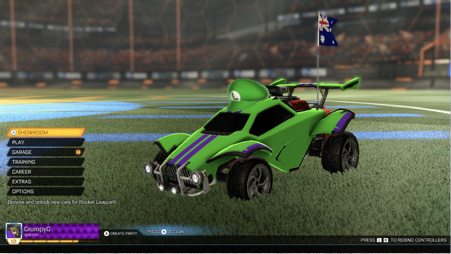 Rocket League flaunts an abundance of different looking courses, some of which are exclusive to particular game modes. Courses all play relatively similar, however some have varied terrain which makes for a different gameplay experience. Rocket League’s courses all feature rather different aesthetics. One course sees you playing in an underwater arena, with a Shark and Stingray gliding in the water above, while another course, Neo Tokyo, as its name suggests, presents a futuristic, neon-clad Tokyo city arena. Some courses even sport alternative time of day and weather modes, further adding to the variety of course selection. Obviously, most of the courses do play the same, but it’s nice to have varied environments, as it saves the game from coming across as overly stale.

Rocket League’s multiplayer is the main reason to jump onboard and stick around, with all the modes available in the multiplayer playlists. Thanks to the cross-play collaboration with Xbox One and PC, Nintendo Switch users will never feel alone when it comes to finding other people online. If you don’t want to play against those on rivalling hardware for whatever reason, the option to turn off cross-play can be found in the options menu. I highly recommend keeping cross-play on however, as when searching exclusively for other Nintendo Switch users, I struggled to connect to games, and when I did, the other players were clearly from other parts of the world, and my online connection suffered. For the most part, I encountered little to no lag when playing online, something I’ve never been able to say I’ve experienced on a Nintendo system before.

Every once and while when playing online I’d encounter another Switch user, but most online games I found myself with Xbox or PC gamers, which I found hard having an issue with. After all, having cross-play means that the game will always be populated, and that’s never a bad thing. 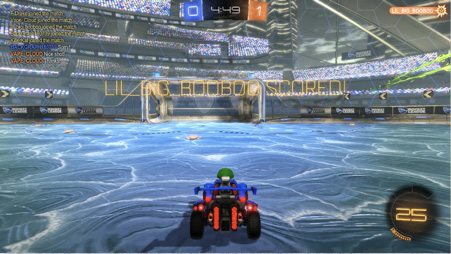 Seamless online multiplayer on the Switch is a beautiful sight

In terms of Nintendo Switch performance, Rocket League’s port is a little hit and miss. The game attempts to provide 720p 60fps in docked mode and 576p 60fps in handheld mode, with the dynamic resolution scaler making sure to drop the resolution in certain situations, to maintain the 60fps performance. As someone who prefers a game to run at a smooth 60fps, I’m perfectly fine with a game lessening it’s graphical fidelity, however, with Rocket League on Switch in docked mode, the game drops at times from a just passable 720p, to a far less forgivable 576p, which can look ugly when blown up on big TV displays. In the end, Rocket League manages to stay around the 60fps mark, but the game starts to progressively uglier as a result.

The game when in handheld mode, manages to hide most of its imperfections thanks to the far smaller display, but the game still struggles and looks quite jaggy and blurry. The games performance drops to around 40/50 frames when split screen is played, but it still manages to provide an enjoyable gaming experience. Performance wise, Rocket League on Switch is by no means brilliant, but I would say it’s still quite easily worth the purchase. Graphics may not be great, but the semi-reliable framerate paired with the ability to play portably offers a unique Rocket League experience that no other system can provide. 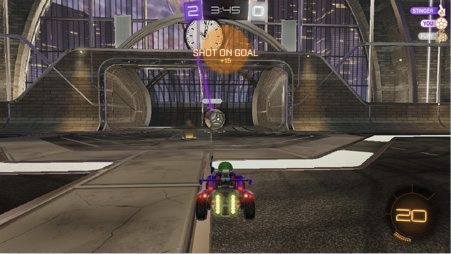 It may not be picturesque, but it sure is fun! 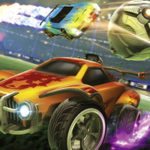