Whether or not you’re a fan of retro-inspired games, you’ve probably heard of Owlboy before. After releasing on PC in 2016, Owlboy garnered universal acclaim and was touted as one of the greatest indie releases in the last five years. Now, just over a year on from its PC launch, the game has soared onto the Nintendo Switch (Owl pun), with PS4 and Xbox One versions not too far away.

Owlboy centres its story on Otus, a mute Owl who struggles to garner the acceptance of people around him. He finds himself scowled and mocked heavily, especially by Asio, his brutally negative mentor. The story sees Otus’ town attacked by Pirates, setting into motion a journey that will see Otus and friends along  travel to many distant lands, in the hopes of stopping the sky-pirates from obtaining the three legendary relics and ruining their homeland. The basis of Owlboy’s storyline is undoubtedly video game story cliche, but somehow it manages to sprinkle in far more emotional storytelling than would initially be expected. 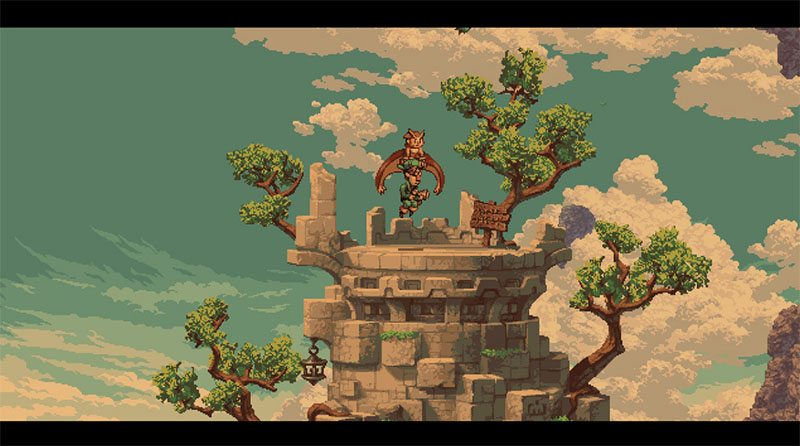 Owlboy is a game that addresses how people have self perceived flaws, and how, despite having weaknesses within themselves, the friends they have around them can make them feel like they belong. This is evident in Otus, with his struggles of being a mute, and how his best friend Geddy and his other buddies manage to give him strength and comfort in who he is. I won’t spoil any more of the story beats, but this game isn’t afraid to pile on you emotionally, as I found myself tearing up numerous times. With its fair share of epic and sad  story moments, Owlboy’s narrative is a true highlight, and an aspect of the game I deem to be extremely important. The impact of the story was something that took me by complete surprise, leaving me heavily engaged, even after the credits had rolled. I do however wish the game didn’t end so abruptly, as the story ends leaving many questions unanswered. Even though it was obviously a decision to leave the ending of the story to interpretation, I wish I was given a more definitive ending.

Owlboy may have it’s slew of heartbreaking moments, but it also has plenty of joyous charm that emanates from the game’s humorous bunch of supporting characters. Otus is a sweet character that despite being unable to speak, provides plenty of character and humour with his variety of facial expressions, while his best pal Geddy is a goofy but caring mechanic, who wears his heart on his sleeve and isn’t afraid to express his opinion. Most characters throughout the game ooze personality and are a breath of fresh air in a genre where many characters can feel particularly stale and one-dimensional. Character dialogue had me chuckling aloud numerous times, which is a testament to how well the character dialogue has been written. Characters in Owlboy are yet another great strength that keeps Owlboy entertaining throughout. 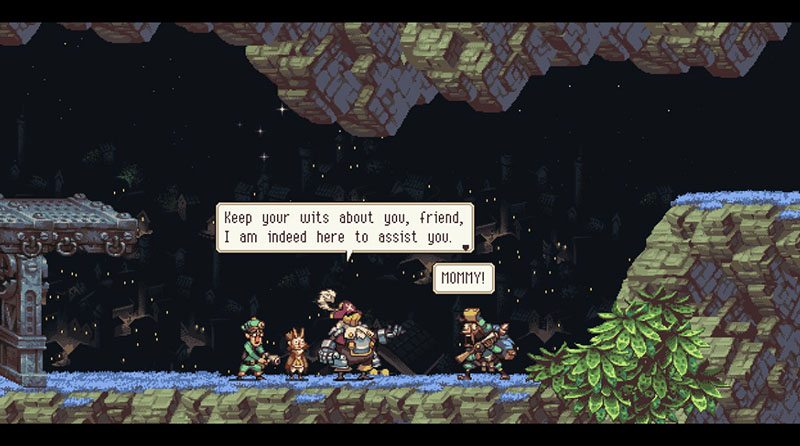 As Otus, you are pretty much given only a spin attack to keep enemies at bay. Otus, as indicated by his mentor Asio, isn’t particularly gifted, so his restricted moveset cleverly reinforces his character. In terms of flying, you’re pretty much free to do it uninhibited most of the time. There is no limit to flying, leading to the freedom of exploration, whilst alleviating the frustration of having to charge a flying meter. There are small segments throughout the game in which the ability to fly is taken away however, which leads to platforming segments that take away your comfort of control. Thankfully, these segments are well executed, leading to the type of quality platforming you’d expect from most other games in the genre.

Despite being unable to talk, Otus finds himself making friends, with these friends acting as individual abilities throughout the game. For example, Otus’ best friend Geddy acts as Otus’ method of attack, with Otus’ flying Geddy around while he shoots down enemies. The gameplay of all the friends throughout the journey is comparable to that of a twin-stick shooter. The shooting of enemies while flying around doesn’t at all feel complex, yet it still feels immensely rewarding to take out a multitude of enemies by spamming the trigger. As the game progresses and Otus makes new friendships, the new friends can be switched through on the fly (Owl pun) at almost any time. As to be expected from a game in the metroidvania genre, some areas can only be unlocked using certain abilities, with Alphonse’s shotgun allowing access to areas that Geddy’s blaster could not. Swapping through characters to ensure you have the right weapons at your disposal to progress through dungeons and defeat bosses can take a while to get comfortable with, but once you get ahold of the concept, it offers an interesting and enjoyable take on metroidvania progression. 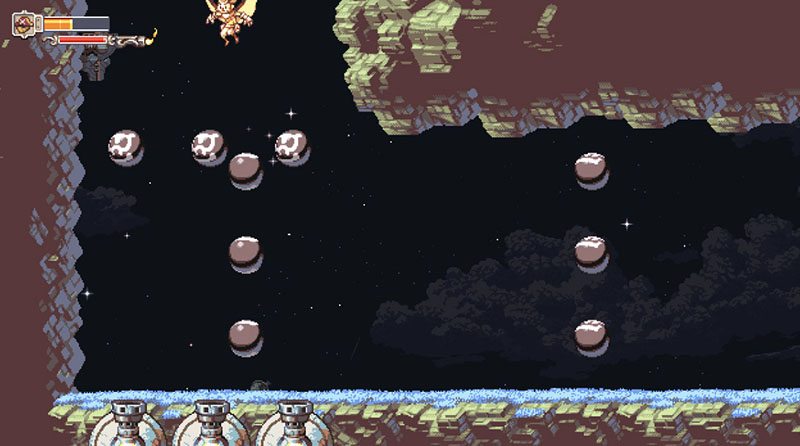 Graphically speaking, Owlboy’s pixel art aesthetic is in a league of its own, being arguably the most detailed and beautiful pixel art i’ve ever seen. The crisp animation looks jaw-dropping in both the Switch versions docked and handheld modes. The game’s highly publicised 9-year development cycle can truly be seen with the sheer quality of the games environmental and character designs. Characters exhibit a breathtaking amount of expression, both in body language and facial expressions. Otus’ face would turn from anger to shock, and in the games darker and more emotional moments, Otus’ body would slump, emphasising the gravity of what had occurred. The environments throughout the world are also extremely lively thanks to quality animation. Shrubs sway in accordance to the breeze, while the grass on the floor despite being so small in size can be seen moving with the wind also. The meticulous detail of Owlboys animation is something that arguably didn’t need to have been done, but the games world and characters are far more polished and expressive thanks to it.

The game’s soundtrack is also breathtaking, with numerous tracks providing great moments. Owlboy’s soundtrack has plenty of melodic tear-jerkers, as well as booming, epic beats, that always seem to perfectly fit in with the part of the game they are played in. My personal favorite would be the theme for the town of Tropos, with its epic piano and violin pieces being the perfect music to emanate Owlboy’s sense of adventure. 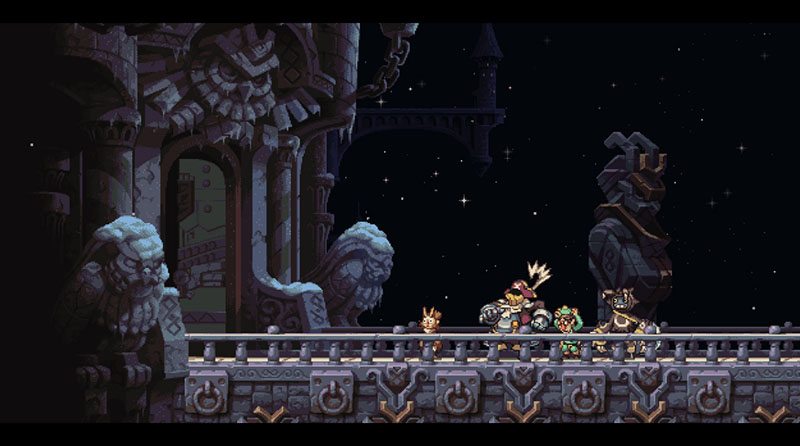 Despite being a brilliant 10 hour experience, Owlboy does have a small assortment of issues that did hinder my experience somewhat. When playing the game on the Nintendo Switch, I encountered about 5 crashes in my full playthrough. Some crashes were immediately after dying throughout the game, while other crashes seemingly occurred during the transitions from one area to another. Thankfully, the game autosaves frequently, meaning that not much, if any, progress is lost, but it’s still an annoyance nonetheless. I also encountered some heavy frame dropping in one of the game’s many boss battles, with the Lava Worm boss battle dropping performance to below 10fps when attacking. This was the only performance hiccup I recognised in my playthrough, but it was yet another frustrating issue, as I found it difficult trying to avoid attacks when the game would chug as badly as it did. These issues are simple fixes and will probably be removed in the coming weeks via patches, but it’s important to mention they do exist. It would’ve also been nice for the game to include a map feature, as it was hard to tell where I had and hadn’t backtracked.

Owlboy is overall a perfectly crafted Metroidvania experience that I implore everyone to play. The gameplay is tight and satisfying, the characters are sweet and charming, the story is remarkably deep and emotional, and the soundtrack ranges from beautiful and whimsical to booming and intense. Owlboy exudes polish and love, with D-Pad Studio managing to design a game that despite borrowing elements from games of the past, still feels remarkably fresh and modern. Owlboy is the complete package, and it offers up an experience that shouldn’t be missed.

Owlboy was reviewed on Nintendo Switch 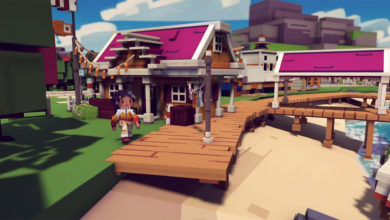