[dropcap]W[/dropcap]e recently wrote about the upcoming Steam release of Cartoon Network game Steven Universe: Save the Light. But Cartoon Network (CN) and Outright Games have announced that it will also be coming to Switch. The game will be ported to Nintendo Switch alongside OK K.O as part of a boxed retail CN bundle.

Steven Universe: Save the Light:

Join the Crystal Gems on the ultimate quest! A mysterious new Gem has stolen a powerful weapon. Only Steven and his friends have what it takes to stop her. “Save the Light” is a unique RPG hybrid that combines real-time and turn-based combat.

Based on Cartoon Network’s hit show, this game stars pint-sized K.O. as he fights Lord Boxman’s evil bots to save Lakewood Plaza Turbo. In this story-driven adventure meets cartoon-brawler, you’ll complete quests, unlock moves & collect cards of your Plaza pals as you fight to become a true hero. 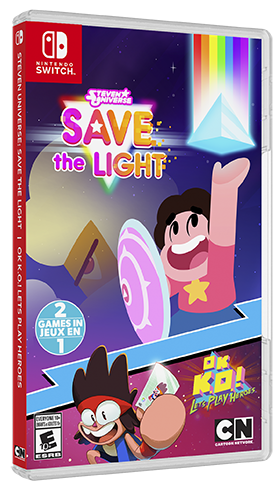