Astro Bears is a competitive arcade-style party-game created by indie developers SONKA. This is an updated version of Astro Bears Party that now includes new Bears, planets and play modes for the Nintendo Switch which released this July 19th, 2019. If you already owned Astro Bears Party, you will get this re-release for free. Below is a quick review of Astro Bears on the Nintendo eShop which you can purchase here for $6.99 US.

You play as a Bear of your choice, with the mode of your choice, which have access to the following abilities: jumping/flying and dashing. Your Bear will run automatically so you have to have quick reflexes while controlling the direction of your Bear. Jumping and flying is useful if you don’t want to run into your opponent. Dashing is more difficult to master in terms of usefulness because you can rush to corner or “cut-off” your opponent quickly if you see the opportunity. Moreover, every time you jump, you leave an “archway” which gives the game another layer of strategy.

What you want to avoid is the colorful “ribbon” that trails behind your opponent which becomes longer the more you move. Honestly, I get some real Care Bear vibes from how cute and colorful the Bears are in this game with these ribbons. The ribbons will follow every action you take so if you jump, it will also leave a line higher up. Depending on whether you choose your ribbon to be finite or infinite, it will change how long the ribbons get the longer you play. When your ribbon is infinite, it starts getting really hard to even avoid your own ribbon which you can also run into and lose.

The planet sizes were what disappointed me the most about Astro Bears because even the biggest planet is rather small. This is why the game can last mere seconds because you don’t have very far to go. I understand that that’s the point but I still feel like having more of an open and bigger planet to play on like Mario Galaxy, would have kept me more interested for longer. Although, it is an interesting concept to have the planet by see-through as you can see where your opponent is going.

Astro Bears has 3 modes to choose from: Party, Competitive, and the new Jetfish Hunting which is a local 1-2 player team-up to beat online high-scores. All modes are basically the same with minor differences save for the last one which I will discuss in more detail below. As mentioned previously, the main objective for all modes is to make sure you don’t run into your opponents’ ribbons which are trailing behind them as they automatically run around your chosen planets. You can jump, dash, fly and control which direction you want your little space-bear to go.

This basic mode lets you play up to 4 local players where you each have your own screen (i.e. 2 players is split-screen). Choose how many points it will take for you to win the session between 20, 40, 80 and 160, the planet size which goes from small, medium, big and huge, if the ribbon is finite or infinite, and the theme. You get 4 points every time you win a round so it can take very few minutes or even seconds to get to 20 points total. The themes only have you changing the lines of the planets to a couple different colors which is a little pointless.

You have the same choice of 2-4 players in this mode but this time you must select 3 Bears each with their own unique stats. In order to win the overall match, you need to at least win one round with each one of your Bears. You will not be able to choose your planet size or whether your ribbon is finite or infinite as the game will randomize it for you. Furthermore, it seems that the larger planet sizes are excluded from this mode. I can see that being the more competitive approach as it is fairly chosen with no one having to fight over which options to pick. The point system is also a little different so this mode is better if you want the matches to last a little longer.

This mode is a great addition if you’d rather play with your friends and not against. Rather than trying to get your opponent to run into your ribbon, you are trying not to run into each other while collecting as many Jetfish as possible. There is no time to communicate with each other to coordinate who is going after the closest Jetfish as the game is too fast-paced. However, it doesn’t take long to get more skilled at playing this game as the rules are quite easy to learn.

When playing Jetfish Hunting, you can either compete for the highest score locally or on online leaderboards. The former is more like playing against yourselves if no one else in the family will be playing this game. My partner and I got very meager scores together before we died several times so as you can see we have no chance in competing online as of now.

You have to choice between 8 Bears: Bishnu, Wojtek, Neil, Cybear, Xiaoli, Randy, Igor and Aki. All Bears will have varying stats of Speed, Turning, Jet Capacity and Jet Regeneration. Basically what you want to do is figure out what are your strengths when playing and maybe do as I did and choose the Bear that will either compliment those strengths or compensate with higher stats in the area you struggle with. An interesting feature I noticed with Cybear and Randy is that Cybear can get hit twice before losing as he has an extra layer of protection, and Randy’s stats are randomized. Here is a list of the descriptions we get for each Bear:

For the low price of Astro Bears I wouldn’t dissuade people from picking up this title if you want to easily grab and play a multiplayer game with friends. Although, don’t expect to have hours of fun playing this game or to replay it often. Rather, expect to have minutes of fun playing this game as the concept is unique, the controls respond quickly as needed, and the 3D graphics are quite nice. The soundtrack is also worth noting that it was very nostalgic to retro gaming and was inspired by the 80s. For as long as I played this game, and again that’s not very long, I did enjoy it. Below you can see a little bit of gameplay including the Jetfish Hunting mode. 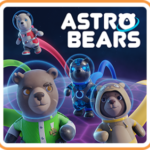