Another Day, Another potential Animal Crossing Switch tease. Nintendo has recently released a new update to Animal Crossing Pocket Camp. One of the main new features was the ability to buy fortune cookies, which are essentially Pocket Camp’s version of loot boxes. For those who aren’t familiar with fortune cookies, they are traditional Chinese sugary cookies, usually packed with a note that is supposed to bring good fortune. Despite being somewhat overpriced, these fortune cookies contain some awesome items. 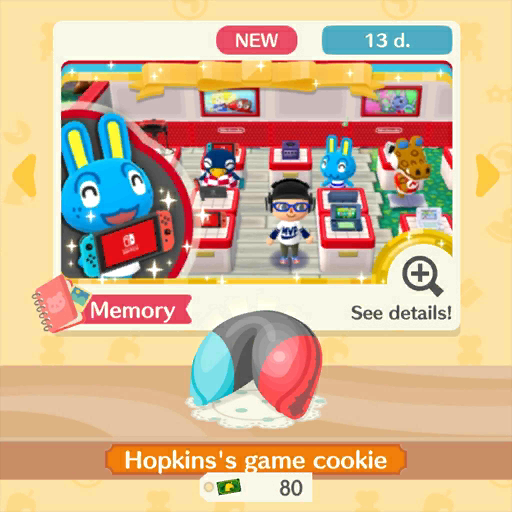 The prominence of the Nintendo Switch in the imagery for Hopkins’s game cookie is by no means an indication of an imminent release of Animal Crossing Switch information, but it does seem like Nintendo’s incessant teasing is leading toward a major announcement. With E3 a mere 6 weeks away, Nintendo may just be cleverly teasing AC fans until then, however the acknowledgment of Animal Crossing Switch could possibly arrive far sooner, with Nintendo’s fiscal year earnings release scheduled for April 26th. In these investor meetings, Nintendo often discusses upcoming titles that will be crucial to their earnings for the following year, meaning that some game announcements could possibly be made before or during the investor meeting. Animal Crossing New Leaf was announced in a similar fashion, so it is possible that Animal Crossing Switch could be confirmed by this investor call.